This is the story of a resurrection. About 10 years ago I was wandering the aisles of The Flower Factory hobby store and came upon a diecast model of a 1960 Impala convertible in the Toy Dept. It wasn’t bad, looked to be 1/25th scale, and had opening doors and hood. And there are no 1/25th scale kits of the ’60 Impala convertible. But various detail things were slightly ‘off’, like the oversized side trim. And all the add-ons like mirrors, antennas, and front fender ‘gunsights’, were mounted in large square holes. But it did look like a ’60 Impala convertible, and it was only $2.98 so I bought it.

I’d had some experience with diecast junk from Flower Factory before, having redone a diecast ’49 Ford Woodie station wagon many moons ago. That one turned out OK but I wanted to really make this one ‘right’. Why? Because I owned not one but two of these great long beasts – one in 1960 and the other in the early 2000s. But it would be a challenge.

My first thought was an ‘all-out effort’ with a change of the chassis and engine (the diecast had a Chevy 6 cyl engine under the hood!!!) So I disassembled the thing completely. All the trim parts like side chrome, antennas, mirrors, and interior door panels, were ground off from the inside. 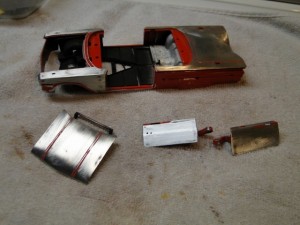 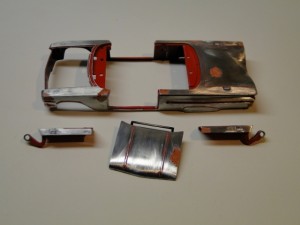 Where the antennas, mirrors, front fender ‘gunsights’, had been, had ¼ inch holes in the metal body. Those had to be filled with Plastruc, then filled again with Gap-Filler Super Glue, primed and sanded down. After I was reasonably happy with the filled in areas, I started removing the paint. 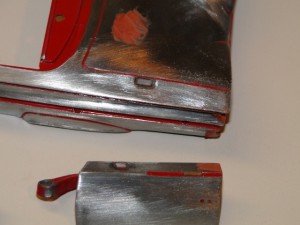 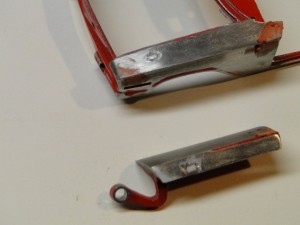 My first thought was to use automotive zip strip. But that would’ve made a big mess getting it out of the curvy body. So I opted to simply sand the baked enamel paint off completely. I started with 220 grit paper, which did the job but it wasn’t easy. It took about 1 ½ hours to do the hood and doors, and another 2 hours to sand down the body to bare metal. I followed up with some 400 and then 600 grit wet/dry paper. 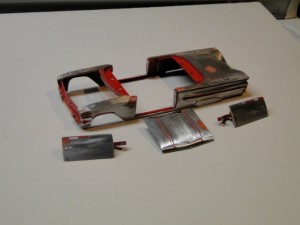 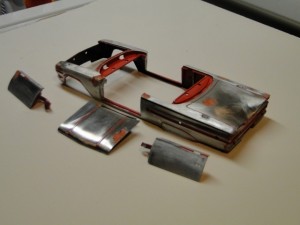 After it sat for 24 hours, I applied two coats of grey primer and re-sanded it with 800 grit paper. Then reapplied the primer. But this time I used Tamiya white primer. Why? Because the Roman Red paint would be ‘brighter’ when applied over a white primer. 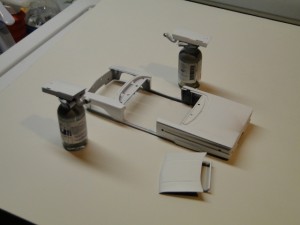 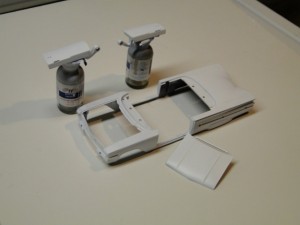 As that dried the next 24 hours, I ripped into the interior. The door panels and rear seat looked OK. In fact the door panels were very good with pop-in chrome accessories like the door handles. But the front seat was trash – wrong shape and size. I was already planning to use the Revell decals for the ‘hounds tooth’ upholstery from the original 1996 Revell 60 Impala kit.

And the dash board was also simplified junk. Since I had long ago bought a Revell 60 Impala hardtop kit specifically for this project, I used the entire dash, chrome trim, and steering wheel, and adapted them to the diecast. I was also going to use the windshield frame from the kit but it was smaller than the opening so that idea was rejected. Then I ‘liberated’ the front seat from the Revell kit. 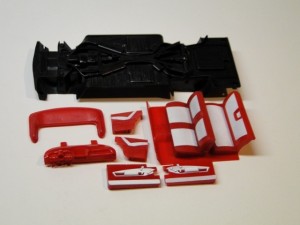 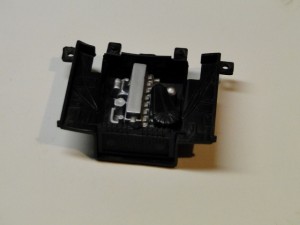 Now it started to look like the right interior. I painted the whole interior white, then masked off the red parts and applied Light Interior Red lacquer from MCW. Ahhh, I’m home free now. All I had to do was apply the Revell interior upholstery decals and it would be finished. I stuck the upholstery decal for the left door in the water, pulled it out and watched it EXPLODE on the paper. Ever try and put a houndstooth pattern back together that was in about 75 pieces? Can’t be done.

What to do now. I asked around and no one had one of those old decals. Enter Dave Dodge of MCW Paint. He was coming back to Canton that week and he had a bunch of them. So I went ahead and applied a couple of coats of clear lacquer to the remaining decals and did the seats, which turned out very well. But the door panels would be tricky.

When Dave arrived he handed me a brand new decal sheet. Hmmmm, do I try it? No! I took his sheet and Xeroxed it, then carefully cut out the door panel upholstery and rubber cemented them to the plastic door panel. YES! It looked very good. A little red flocking for the carpet and start putting it back together. 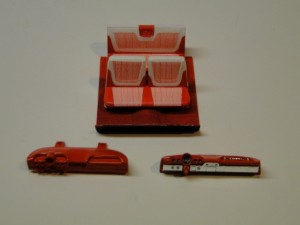 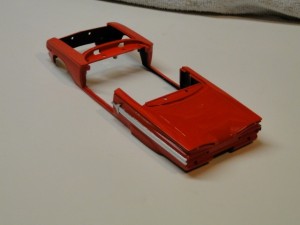 As all this was drying, I began applying the MCW Roman Red lacquer paint. I applied 4 color coats, polishing between the coats, Now it was a nice shiny red and began to really look like a ’60 Impala convertible.

The engine and frame you ask. I simply painted the engine bottom orange, added the oil filter, and then painted the chassis semi-gloss black to simulate undercoating.

One thing I was never happy with was the rear deck trim under the trunk lid. It was plain chrome and the real car has a large ribbed panel that carried the tail lights. Plus the diecast tail lights were wrong shape and oversized. Could I use the entire tail light panel from the Revell kit? I tested it and it fit perfect. I used my trusty razor saw to remove the old panel,, then had to BareMetal Foil the back of the bumper where I’d cut off the old panel.

After painting the edges of the wheel rims red, and adding the hub cap center decals from the Revell sheet, I had my nicely restored diecast 1960 Impala convertible. It doesn’t look too bad either. Why go to all this trouble and then write about it? Because I know all of you have had a model that you’d love to have in your collection. Maybe you find a diecast version, maybe you find one in a junk box at a swap meet. Maybe you’d just like to ‘resurrect’ an old model from your collection. This just proves that it can be done. Just don’t get in a hurry. 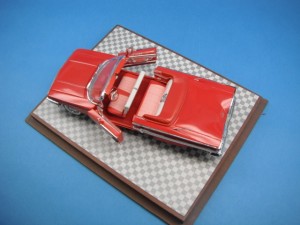 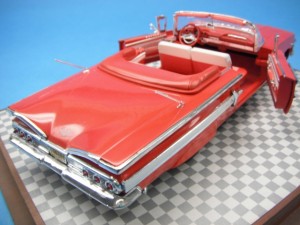 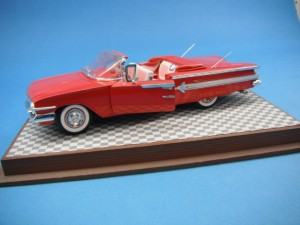 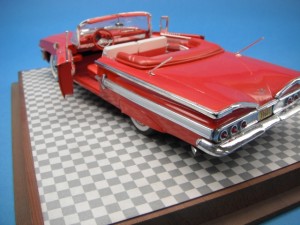