For cockpit choice I’ve got both the Verlinden and the Aires sets to work from. The Aires set I picked up at Nationals a few years ago. last day, last hour and they had the whole table 50% off. Couldn’t pass it up. The aires set has canopy and wheel well upgrades in addition to the engine details. It looks pretty good. That’s a master Pitot tube in there along with the Zacto nose enhancement for a facelift.

Then I was looking at all the Eduard pieces and just didn’t like the fuselage PE they had. It all sticks off the surface too much. That’s when I remembered seeing an email about Archer Fine Transfers announcing a new sheet. I used their hatches, hinges, and other resin bits on my T-38A and now they have redone the sheet at 1/2 the thickness of the original.

The other custom piece is the smoke tube. It’s shown on the box art BUT it’s not included in the kit. Can you believe I found Ed Kinney’s build of a pair of Huns and he had custom made a smoke tube for his 1/48th scale F-100. The pic was good enough for me to make out the key pieces and I was able to recreate it from piano wire and 1mm shrink tubing.

Lastly I wanted to do a “Heading Home” theme. It’s rare to see pics of the Thunderbirds with their drop tanks on and I found one of the F-100 that really inspired me. Then to my surprise I had trouble finding pics of the drop tanks. Turns out the F-100 at the MAPS museum has a set mounted! A quick drive-by and I have a walk-around of the 335 gallon drop tanks to finish off this build.” Very nicely done Chris!!! 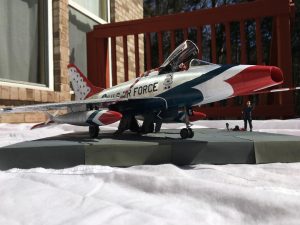 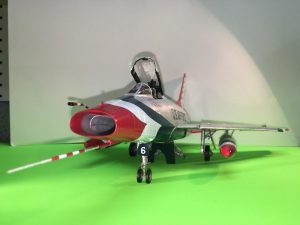 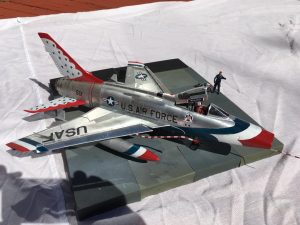 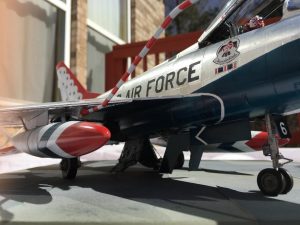 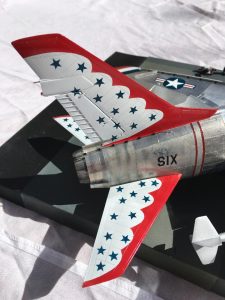 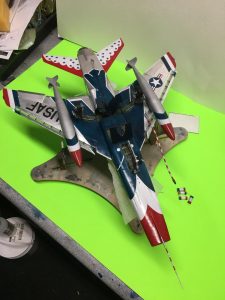