Member Bob Ulrich built this beautiful F4C from the Vietnam War era and did a masterful job for our viewing pleasure. Bob shared some details of the build as follows: “Academy 1/48 F-4C. Mostly kit cockpit except all sidewall details were scratch built as the kit provides none. Front cockpit throttle scratch built, aft throttle improved. The kit provides only the aft throttle for reasons I cannot even imagine. The instrument panel coaming in the front cockpit was revised to look more in scale. Quickboost ejection seats, Eduard PE canopy locking hooks.

Plumbing added to landing gear struts, auxiliary air door interiors boxed in. Kit provided SUU-23 gun pod backdated to a SUU-16 and mounted on the centerline, TER’s with Hasegawa Mk82 Snakeye bombs mounted on inboard stations, kit drop tanks on outboard stations, kit Sparrow missiles in aft wells only. Paints from Model Master and Floquil, with bare metal areas done in Alclad. Decals by Furball for an F-4C of the 366th TFW at Da Nang, ‘The Blue Max’, flown by Korean War double ace Boots Blesse in 1966. Kit decals used for stenciling – these aircraft were originally gray over white and were repainted in SEA camouflage in theater, and only the major stencil markings were reapplied.”
Thanks for sharing Bob! 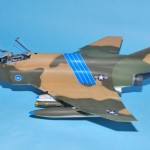 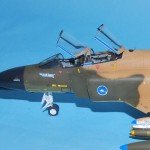 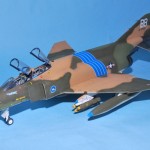 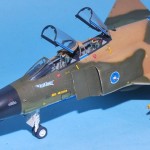 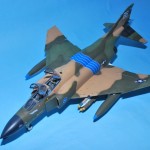 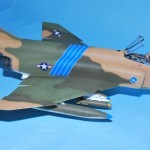 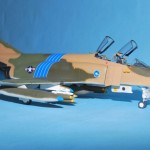 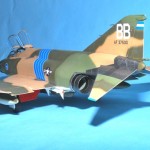 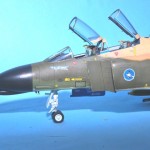 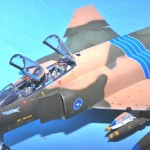 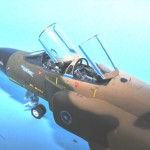